The near future for Intranets with O365

on September 27, 2018
Most people will be aware that Microsoft have held their annual Ignite Conference where they showcase the latest and greatest aspects of the various Microsoft offerings. Unless you have a lot of time to watch each of the presentations then you rely on blogs and social media to improve your awareness of the big headlines. There are a number of resources already out there that do that, and do that in a much better way than I ever will, however I'm going to share the areas which I am most excited about. Yes, there are areas that are very innovative, and are taking SharePoint to new places, but what I am most interested in, is what is coming to SharePoint which will help me to show my clients how they can really build organisational level intranets and solutions without having to resort to customisations. As a developer by background, I never thought I would actually see myself taking this stance.

The three key areas I'm going to focus on are the areas which I believe will add the most value to those who wish to build an intranet using SharePoint Online.

Whenever I speak to an organisation about who has the overall control of an intranet, there is one of two options: Marketing or Communications. With the SharePoint home page showing a roll up of all news items across all sites I have access to, or Hub sites rolling up all news items from their associated sites, it's easy to bury the corporate announcements which could be deemed most important. 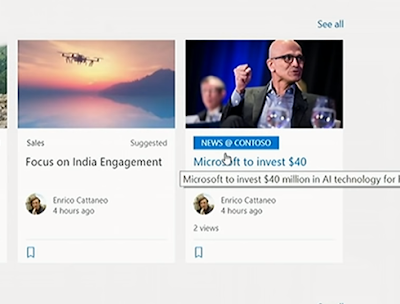 From that screenshot you can see that the organisational news is highlighted to immediately distinguish it from everything else. Quite subtle, but it gives it that differentiating factor that should satisfy most Communications teams.

From a Marketing perspective, the biggest requirement I ever come across is that they want a centralised image library where they can place all of the approved images which their content creators should be using across the breadth of their Intranet. This could have been done in the past but was never the most intuitive way of doing it, with users having to navigate to the image library, copying the URL and then using that to insert an image into a page. Microsoft have demonstrated during this conference that the ability to have images and documents which are approved at an organisation level will be available when adding content directly from your page. This is going to be a big winner for those companies who are very brand aware and want to maintain control over what images are being used.

Not only do I believe that this will appeal to the marketeers out there, I think that this will also factor heavily into conversations I have around Governance, as this brings in another way that organisations can ensure that their users are creating content in the right place, using the right resources.

I always found that audiencing had a very marmite feel to it, you either loved it or hated it. I actually really liked audiencing, although found it quite limiting with the way that it worked with previous versions. Audiencing is now coming back to the modern experience, and will work in much the same way as it previously did. The stand-out thing for me is that it will use SharePoint Groups, but will also allow the use of Active Directory groups to target my content. Again, I'm going to go one step further with this, because the big attraction for me, is that it will support Dynamic Azure AD Groups, where the audience will change dependent on the attributes of that user as assigned in AD. Audiencing UK news to all users who have the UK as their location in AD is a big plus.

Obviously this requires that your Azure AD is in a good state, but I've found that admins have taken a lot more care over the data that is stored within Azure AD than they ever did when they were simply on-prem. This is probably because the quality of the data in Azure AD is a lot more transparent, being surfaced through Delve as a simple example. Also, for you to take advantage of dynamic groups you need to have Azure AD Premium, so there's additional cost, but from my experience worth it if you really want to take advantage of dynamic group membership rather than manually moving your users in and out of groups.

All of the other announcements

There were a lot of other really cool things which were covered at Ignite, and as I start to dive into them a little bit more I'll expand out my blog posts about this as well and how I see it as being useful going forward. If I'm honest, I think I've watched both of Jeff Teper's keynotes several times now as I keep going back thinking, did I dream that?

Don't get me wrong though, there are still a number of areas that need to be tackled within SharePoint Online to bring the modern experience up to full maturity, and they are slowly starting to creep onto the road map (YES!!! MODERN DOCUMENT SETS!!!). Office 365 and SharePoint is definitely moving in the right direction, and with all things it takes time, but that's not going to stop us (and our customers) from wanting everything now.