on September 10, 2018
There are occasionally small things released in Office 365 which make me really geek out, and this is one those small features. If a message is posted into Microsoft Teams is in a language other than your native language, you can click on translate and it will translate it. I.e. if a message is posted in French, then, for me, it will be translated to English.

The reason that I get so excited about, what most would consider to be small pieces of functionality, is because these are the features that make Microsoft Teams stand out from others in the market. The ability to converse with others within the business, especially in a multi-national, where English isn't their first language.

I demonstrated this on a few internal demos last week and it was well received. For my demo I simply posted a message in Teams Chat which was in French. I'm not a French speaker so I've had to rely on online translators for me to produce the messages, but here is what I've found.

I then brought up the contextual menu for this message, I have the ability to select Translate! 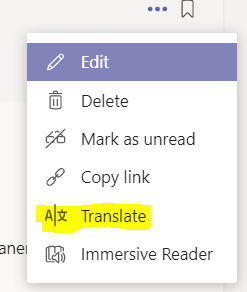 When selecting that option, the text changes to English immediately so I can then read what was posted.

The message also had a "translated" identifier placed against it to show that I had used the translate option.

Being as this worked for languages based on the Latin character set, I thought I would see if Microsoft were living up to their claims that this would also work for other Character sets, so I tried it for Chinese, Hebrew, Arabic and Hindi. They all translated to about 90% accuracy, but were good enough to understand the message.

The full list of supported languages is here:
https://support.office.com/en-us/article/microsoft-teams-supported-languages-for-help-content-9c71d10a-0c5c-49d4-b6d7-0c58cdfdf4cf

So why did I choose to blog about this? The reason is because this is one of those small pieces of functionality that could make a huge difference to the organisation that adopts it. Language has always been a hurdle for multinational working, and now Microsoft Teams is helping us to smash through those hurdles.