on December 14, 2019
More and more we are starting see other applications from Office 365 make an appearance within PowerApps. First it was PowerBI, being able to surface tiles in PowerApps to enhance our apps with data visualisation. Soon it will be Stream too, allowing us to bring in videos from our organisational video platform. But what I'm going to look at today is the new relationship between Microsoft Forms Pro and PowerApps.

Recently Microsoft Forms Pro appeared as new control which can be added into my canvas apps. This is quite cool because I love the Microsoft Forms interface, so I can now create all of my forms and just pull them into my apps.


What is Forms Pro?

Forms Pro is the upgraded, premium version of Microsoft Forms which allows to take all of the great functionality of Forms and adds some nice additional features to it. This means that you can still create surveys and quizzes, capturing responses and results without having to write any code, but the analytics which take place behind the scenes are much more in depth, performing sentiment analysis, AI driven analysis and even allowing the use of survey variables. 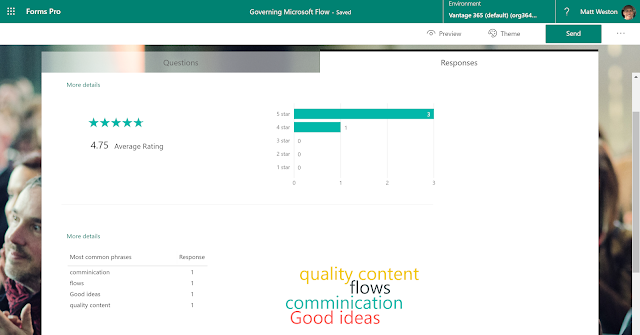 We can still use Forms Pro to create our surveys and quizzes, and then surface them within our PowerApps.

The question that has been asked though, is why would I use Microsoft Forms rather than just creating the form directly within PowerApps?

Why would I use this?

I can really easily build a form using Microsoft Forms, certainly much quicker than if I was going to create the same thing within PowerApps directly. Especially when I introduce branching logic, or even the multi-lingual aspects of what Forms can do.

It also allows me to split the development more easily, as one person can create the PowerApp while the other creates the Form.

So now let's look at how we can use our Forms within PowerApps.

Using the Form within PowerApps

On the insert menu within the PowerApps Studio, we have a menu group called Input. This is where we can find the Forms Pro survey control, which will allow us to place the control onto the canvas.

When I place the control onto the canvas it will appear as an empty control with the message "Your Forms Pro survey isn't connected yet". This is because there is a property in the property blade, on the right of the screen, which allows us to connect to our Form.

The property that we are interested in using is the Survey Selector property, which will allows us to select a Form which already exists within Microsoft Forms. Selecting a survey will immediately render the form directly onto your canvas, and so you can then complete it within the context of your app.

When it renders, it behaves in exactly the same was as it does if I added it to SharePoint i.e. it removes the background and just places the actual form within the control. To me, this is a good thing because I can create any additional decoration within my app. 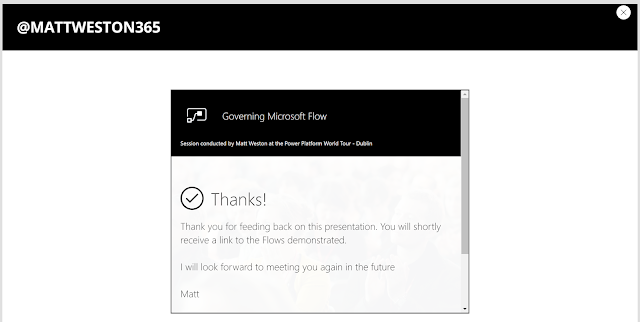 I am already looking at ways in which I can leverage this more within my PowerApps as I think is going to be really useful going forward, and adds more layers to this codeless approach to development.

Forms Pro is the premium version of Microsoft Forms which brings with it better ways of automatically generating insight from the responses you receive from your surveys.

Recently, a control has been added to the PowerApps canvas apps which allows me to place a form directly within the PowerApp. This allows you to take advantage of the fantastic functionality within Forms such as the branching logic, multilingual support etc and implement that. It also allows you to have someone concentrating on the Form whilst someone else concentrates on the app.

The actual control is so simple to place into your canvas, once it is placed on there, you can simply use the survey selector in the properties blade to select the form that you want displayed. But because this just places the Form ID into the control properties, you could have something a little more dynamic allowing to potentially select multiple forms to use in your app.

I hope this blog has been useful, and as always I welcome your feedback.