on December 03, 2019
Microsoft Forms is quickly becoming one of my favourite applications within Office 365. It's so simple, yet can be so effective in many different scenarios. As a product it's not that flexible, but with a flexible imagination it can be used for many different applications.

One of the best things which was released only in the Summer of 2019, is the ability to make multi-lingual forms. Before this update, if we wanted the same form in both English and Spanish then I would have to create individual forms for each language.

The really cool thing is that I can now have a single form and have language switching available as an option to the end user.

If you've never created a form using Microsoft Forms in the past, then this is just a quick heads up. To create a Form, log into the Office 365 portal and then select Microsoft Forms. This will present you with the Forms home screen.

You can create one of two items from here, a Form or a Quiz. At their most basic level,  Forms are designed to capture inputs from a user and then provide a basic graphical dashboard to represent the responses. A Quiz on the other hand allows you to assign scores and weightings to answers to that you can report a score back to the user afterwards.

Both Forms and Quizzes can be sent to both internal and external people, which makes this really handy to get a form based response from someone outside of your oranization without having to worry about guest access or licenses.

When we create a new form, we simply need to give it a title and provide some questions for the users to answer. 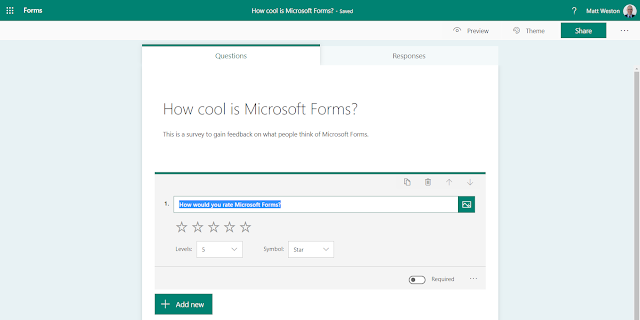 I have now created a Form in English. Let's now have some fun with other languages.

In the top right corner of the Forms editing window, is an ellipsis (...) which allows me to get to the settings for the Form. One of the options on this menu, is Multilingual.

When I select this option, I will be presented with a blade which allows me to define the Primary language. For me, I obviously always change this to English (United Kingdom) but you can select whichever language is pertinent to you. I've struggled to find a language that's not there, the only one I've managed to not find is Klingon, which I admit I'm a little disappointed with as Bing Translator will translate to Klingon. majQa' toh!!

You can also add additional languages, so that the user can switch to their preferred language whilst filling out the forms. For the purpose of this demonstration I have added Spanish, German and French.

Before I start doing anything else in the editor, let's have a quick look what has happened on the Form when we preview it. The key thing to point out, is that in the top right corner of the Form, I now have a language selector which defaults to the primary language.

If I click on the language selector, I can then select any of the additional languages that I have specified on my language blade. If I change the language to Spanish, let's have a look at what happens.

As you can see, the text which appears automatically, i.e. the parts which I can't control such as the welcome and the footer information, are all translated into the new language. But none of the text which I have defined has been translated, so we need to handle this to make my form truly multi-lingual.

I'm sure that you're reading this now expecting me to drop some ultimate pearl of wisdom to automatically translate the questions into the desired language. Unfortunately the product isn't there yet (hopefully in the future eh Microsoft?). But there is the ability for me to provide my own translations, so that when the language is changed, every part of the form will be presented with the correct text.

When I hover over one of the additional languages, I have a small edit icon appear, which will allow me to edit the various pieces of text for that 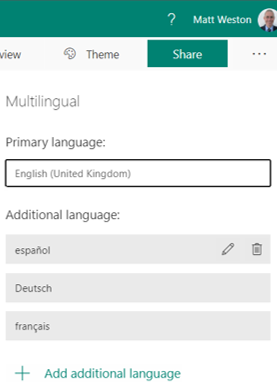 When I select the edit icon, it will isolate the header, section headers and questions so that I can provide translations to the questions. 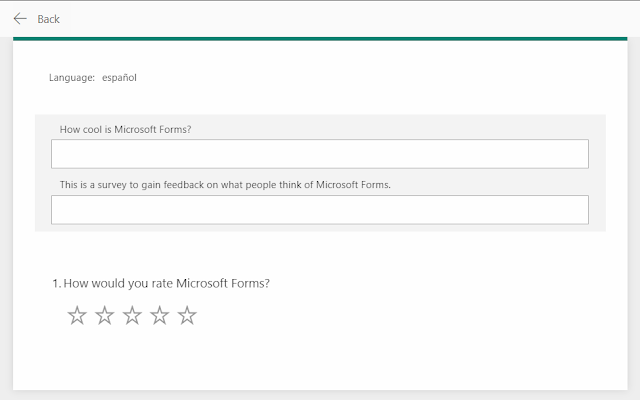 If you are fluent with Spanish, please forgive the accuracy of this next section as I'm relying on Bing Translator, but hopefully it will just help to illustrate the point. It is simply a case of going through and updating each question with the relevant translation. 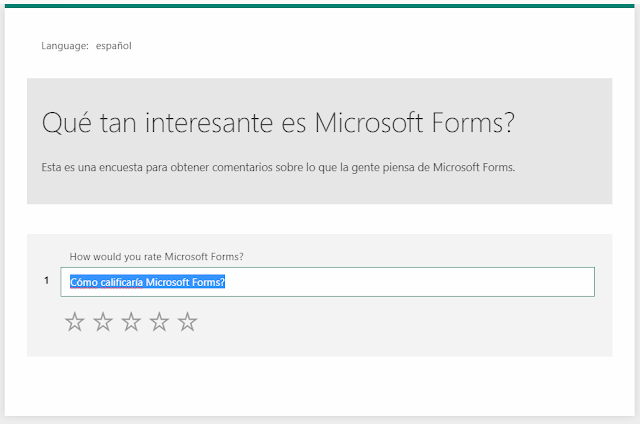 Once that has been done, I can just click back, and then my form is ready to be completed across multiple languages. 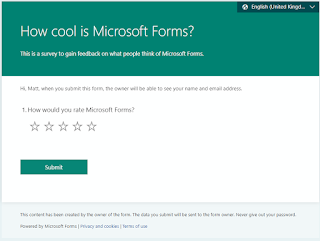 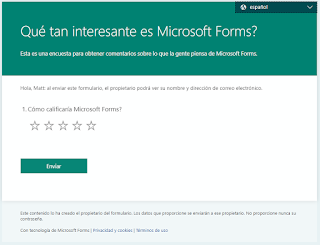 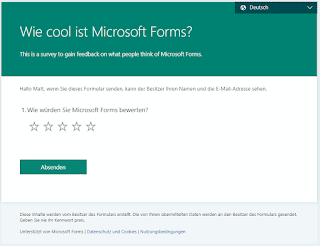 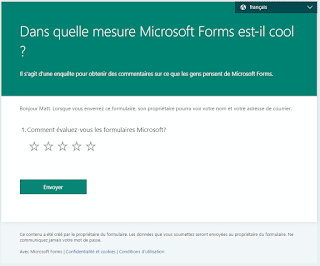 Microsoft Forms is quite a simple yet effective tool which is available to everyone who has Office 365 licenses. It is really useful for quickly and easily creating surveys and quizzes and then using the built in dashboards to visualise the data.

One of the most exciting updates has been the roll out of multilingual forms, whereby parts of the Forms application will be automatically translated to the target language, while the questions can be customised and translated by the user. This allows you to create a single form which can be sent to people all over the world to be viewed in their first language, and all of the data is collected in a single place.

I hope you found this blog useful, and as always, feedback is very much welcome.
Microsoft Forms O365