on December 07, 2019
Twelve months ago, I wasn't along in thinking that the writing was on the wall for Yammer, and was always asking the question, so where does Yammer really fit? The social aspect of Yammer was always a winning argument, but then Teams came along and allowed us to chat in a semi-formal/informal manner yet did it in a way which integrated with everything else in Office 365.

Other than the fact that Yammer could support more users than Teams in a single group, I just couldn't see a long term future for the product until the Q&A functionality was introduced. There have been more enhancements to Yammer such as the documents being stored within a Group enabled SharePoint site, and the profile store now being integrated with O365, but for me the winner for Yammer is the ability to mark a response as the answer to my question.

This functionality isn't really anything new in the wider world of O365, but it is new to Yammer. Quite often on technical forums such as the Microsoft Tech Community or in the Microsoft Power Platform community forums, you can ask a question and then if someone gives you the solution you can mark is as such.

So why am I starting to talk about Yammer for fulfilling this?

I have presented a number of times on governing Power Automate, and, in my opinion, part of that process should be the support frameworks for your users. Particularly in larger companies. building internal communities so that users are empowered to help each other is extremely important. This is where I see Yammer's future, in facilitating this self-help culture.

As Yammer is designed to be a social media platform within your tenancy, there's not a lot of user training required as most people will be familiar with how to post something onto a wall. So in this example I have a Power Automate Yammer group set up, where someone has asked a question. 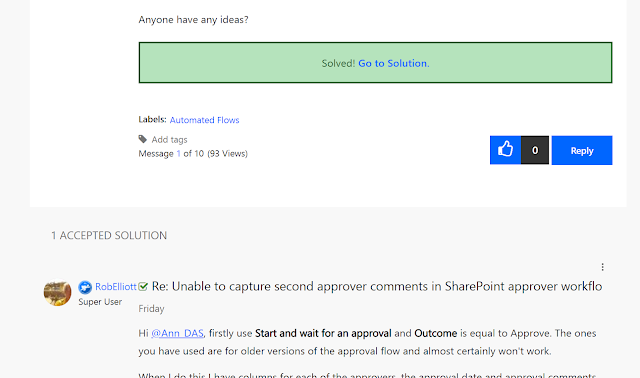 From there other users will respond with suggestions for what the resolution to the issue could be. 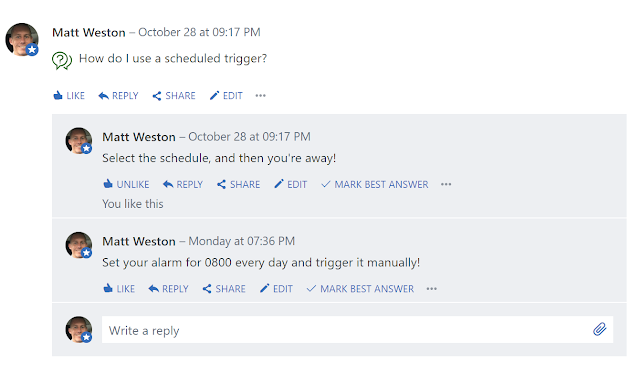 If one of the responses helps me achieve what I want, then I can mark it as the "Best answer". 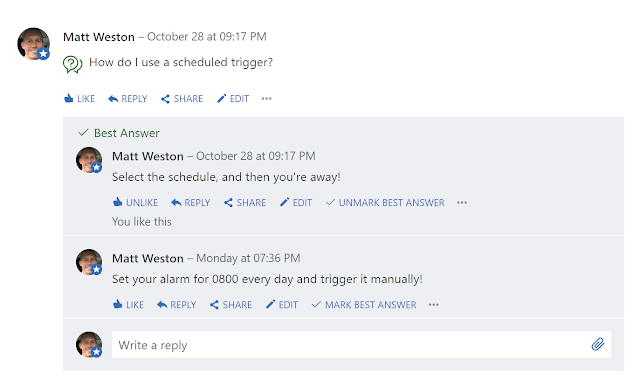 In the future, if someone looks for or searches for a similar problem, then they will be able to see which solution actually helped me and can then hopefully help them in a similar way.

This I see as being extremely useful for teams who are not geographically situated together, where they can then expand the pool of knowledge and experience across the entire footprint of the organisation.

The nice thing is that with the Yammer web part and the Yammer integration with Teams, I can really bring this community to life in a number of ways to support all elements of the organisation.

Yammer has had a much needed functionality uplift in terms of allowing Q&A type functionality within a community. It mirrors the type of approach that most technical forums now demonstrate whereby a question is answered, people answer, and the best answer is selected by the original author. This is to allow others with a similar problem to quickly identify what worked for someone else.

This will be a great method of building communities internal to an organisation, whether that is for a technical community or a way of consolidating knowledge and expertise across an organisation with a large footprint. It brings everyone together to help and builds that culture of support that so many organisations need.

I hope you found this blog useful, and as always, feedback is very much welcome.
O365 Yammer